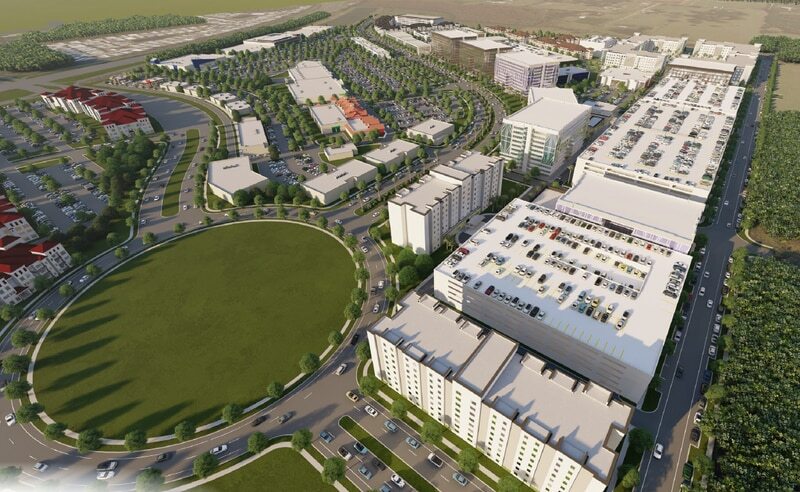 The Edgewater Urban Center is planned at the new Florida’s Turnpike Interchange at New Nolte Road. The midrise apartments on the left of the frame will likely be first, along with retail uses along the new road. (Rj Whidden and Associates)


With construction now underway in Phase 1 of Edgewater, master developer BTI Partners is moving forward with the design for the mixed-use community’s urban district east of Lake Tohopekaliga.

The Preliminary Subdivision plans for the northernmost quadrant of the community give a glimpse into the future, where hotels, offices, apartments and shopping centers will line the Cross Prairie Parkway.

The total Edgewater plan covers 1,400 acres and is divided into seven phases. BTI Partners is currently building the parkway and infrastructure to serve Phase 1. Kevin Kramer, BTI Director of Land Development, told GrowthSpotter the firm has three national homebuilders under contract for the 1,125 homesites. 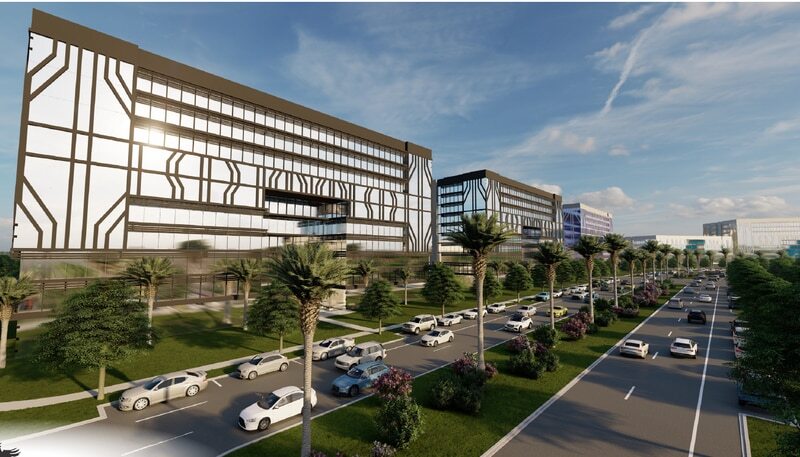 “This is the main interchange that really is serving this whole side of Osceola County between the Turnpike and the lake,” Kramer said. “So there’s several masterplan communities — four or five of them down in this area — and this is the hub of the urban center that would serve all of those.”

The interchange is funded for construction in 2024, so Kramer said BTI wanted to begin the planning to align with that schedule. “It’s a future phase, it’s more likely going to be Phase 4. But it’s a big plan with a lot of intensity … it just made sense for us to get ahead of the design,” he said.

The timing for construction will depend on the interchange construction and market demands. The PS includes a 14.7-acre tract north of the New Nolte extension, technically outside of the urban center, that would be approved for a 300-unit midrise apartment complex. The urban center is entitled for an additional 1,200 resident units within the mixed-use portion of the district. 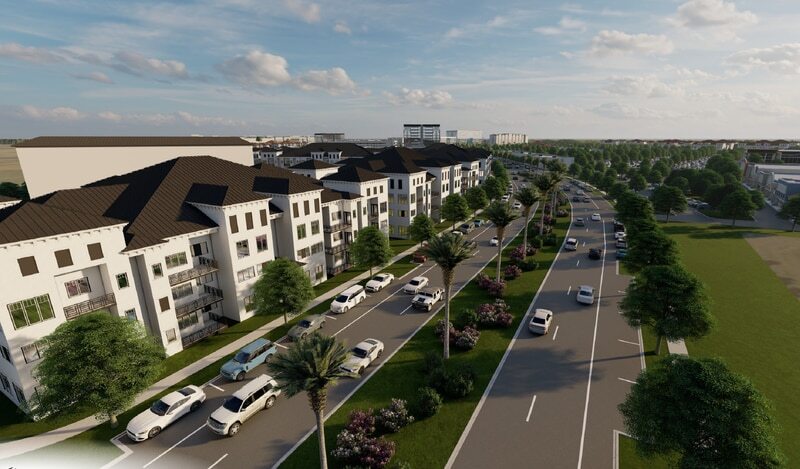 Edgewater Neighborhood 1 calls for a suburban-style, 300-unit apartment complex. Taller, higher density housing would be built later as the urban center develops over the next decade. (Rj Whidden and Associates)

“I think today the market is surface parked, three- and four-story walk-up apartments,” Kramer said. “But over time as the urban center develops, the interchange opens, that urban center that the plan you see contemplates that it will evolve into taller, more intense multifamily type development.”

The plan also envisions at least three shopping centers with outparcels fronting on New Nolte Road and Cross Prairie Parkway. “From a commercial standpoint, it’s got a mixture of some power center in there ― two in the north half. And then there’s also more of a town center concept on the southern half. We’ve got some parks and civic space mixed in there, too.”

The retail will serve Edgewater’s neighborhoods, but also residents living in the adjacent Tohoqua neighborhood to the north. Plus, an additional 1,200 acres of the original Edgewater DRI are under contract to a developer, according to broker Daryl Carter. That acreage, known as Edgewater West, is entitled for up to 3,650 residential units. 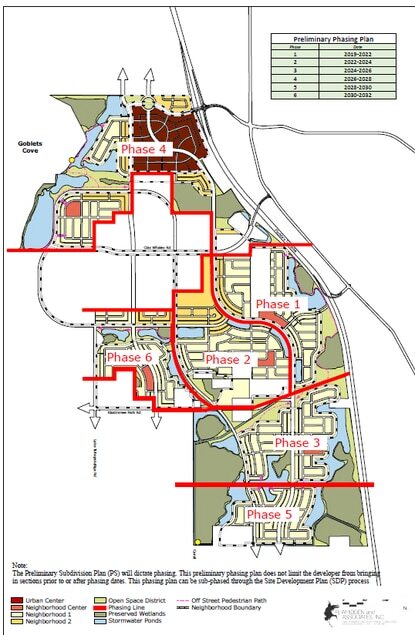 “If I had to guess, I would think a grocery and pharmacy would be the first [retail] use, and that’s just because so many homes are selling that the demand is there,” Kramer said.

BTI’s planning consultant, Rj Whidden and Associates, is expected to submit preliminary subdivision plans for additional residential phases later this year. “The demand has been strong from builders — lot’s of interest,” Kramer said. “So we’ve begun the planning stages going in three directions.”

Earlier this month Lennar Homes paid close to $20 million for future phases in Tohoqua. The builder now controls over 700 lots in the community, where it joined Mattamy Homes and Pulte.

South of Edgewater, Fontana Lakes is approved for 1,752 single-family homes, 1,200 multifamily units and 170,000 square feet of office space. The 677-acre mixed-use development also will have a private marina on Goblets Cove. It’s one of six large master-planned and mixed-use communities that make up Osceola County’s East Lake Toho element of the Comprehensive Plan. Combined, they comprise more than 11,000 acres and have entitlements for 16,380 single-family homes and 11,800 multifamily units as well as commercial centers, office parks and school sites.

“You know, several DRIs in this area have been hanging around for the past few decades, and it’s finally happening,” Kramer said. “We’ve broken ground, construction has started, and engineering drawings are designed and approved. And the time has come.”